Pick up almost any issue of a weekly Bay Area paper, and you’d wonder why anyone wants to live in San Francisco. Astronomical rents! Techies taking over the Mission neighborhood! City College on the brink of closure, threatening to dump 90,000 students on the streets! Metered parking on Sunday afternoons, as if it wasn’t already hard enough the rest of the week!

So why do we—meaning underemployed, middle-aged hipsters—continue to doggedly stick to our overpriced apartments? Well, how many other vibrant cities can you live in where you can bike less than an hour from town and see this: 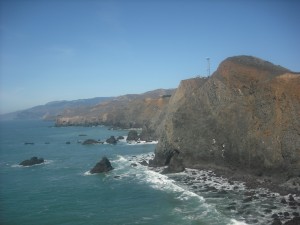 The Marin Headlands, as seen looking north from the Point Bonita Lighthouse.

From Golden Gate Park, it is indeed just less than an hour to this stunning view. Even many longtime biker-residents, however, remain unaware that Point Bonita Lighthouse is  eminently reachable without much strain—on one of the two routes from town, anyway.

For the tougher of the pair, ride across the Golden Gate Bridge and go west (left) when you reach the Marin side. Your reward for an admittedly long, steep climb to the summit of Hawk Hill is this: 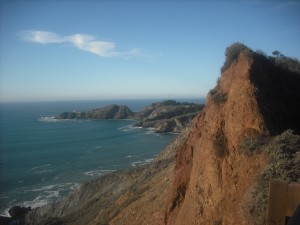 The Marin Headlands, after you survive the steep 15-minute uphill ride the starts from the west side of the Golden Gate bridge.

And from the same vantage point, when you look back at the city, you’re greeted with not just one but two of San Francisco’s greatest gateways: 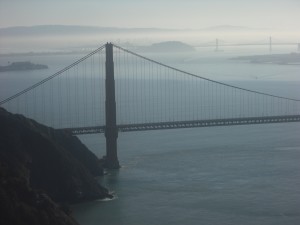 It’s not far from the summit to the Point Bonita Lighthouse, but the steep (18% at its outset) downhill grade admittedly isn’t for the faint-hearted. If you’re up for the rollercoaster-like dip, make sure your brakes are in good shape. And, as tempting as it might be to look at the stunning coastal views to your left as you descend, keep your eyes on the one-way (in the downhill direction, fortunately) road, at least until it levels out a bit after the first mile or so. As pretty as that cliffside is, you don’t want to tumble over it.

As a somewhat easier option, go east (right) instead of west when you cross the bridge, go a couple hundred yards or so downhill, and make the first left to go through the tunnel. It’s still a bit of a white-knuckle ride, as the  one-way tunnel traffic goes in different directions depending on the lights, and  cars might be coming toward you. There are bike lanes on both sides of the road, however, and once you emerge, you get a couple miles or so of rural-esque scenery.

There’s one steep hill just before the lighthouse, though—not as steep (and not nearly as long) as the coastal route, but still enough to knock the breath out of you. You can lock up at a small bike rack at the trailhead to Point Bonita Lighthouse.

It’s warm drought time in San Francisco this winter, but as dire as the water situation is, that’s given bikers some stunning warm, clear days to take advantage of the unseasonable weather. On one such 70-degree Monday a few weeks ago, however, I was surprised by this view as I reached the trailhead: 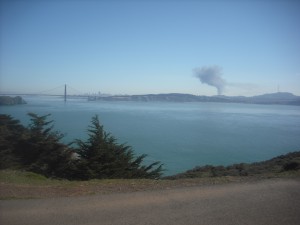 Looking back to San Francisco from the trailhead to the Point Bonita Lighthouse, February 24.

Turns out there was a big fire midday in the Bayview neighborhood of San Francisco, not far north of Candlestick Park.

From the trailhead it’s a short, beautiful stroll to the lighthouse. While the trailhead’s open all the time, however, the end bit that goes to the lighthouse itself (automated since the early 1980s) is only open 12:30-3:30 Sat-Mon. Park rangers give a brief talk about the lighthouse’s history, and there are small displays at the foot of the structure. The bridge to the lighthouse isn’t for the queasy, swaying noticeably if a dozen or two visitors troop over at the same time: 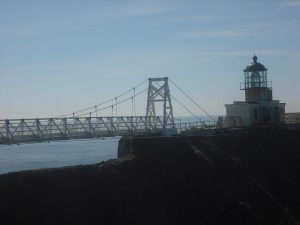 The bridge to Point Bonita Lighthouse.