The relationship between rock music and baseball is an odd and not especially fruitful one. There haven’t been any guys who excelled at both making records and major league ball, though more players have cut records than you might guess. A great many hip rock fans are big baseball fans; not many, if any, big leaguers are into hip rock. Page through the back issues of Chin Music, the fine and unfortunately defunct fanzine that interviewed ballplayers about rock (and indie bands about baseball), for the amusing evidence. 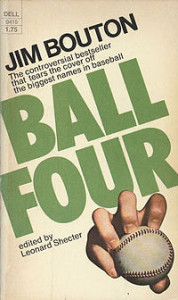 Spring training just having sprung, I had the urge to look back at what the diary I once called “the Sgt. Pepper” of baseball books had to say about the matter. Jim Bouton’s Ball Four, still the finest first-person account of playing major league (and, for a bit, minor league) ball over an entire season, doesn’t for the most part deal with music. His nearly day-by-day log of the 1969 season talks about baseball a lot, of course, but also almost everything else, from sex and politics to Howdy Doody. In those infrequent passages where music plays a part, it says as much about his marginal role on his teams as it does about his taste.

As a liberal, caustically funny guy not afraid to speak his mind, Bouton didn’t fit into the mainstream of clubhouse culture, to understate it. That wasn’t such a problem when he was a 20-game winner and World Series hero, but it became more of an issue when he was a relief pitcher with the expansion Seattle Pilots, fighting for the last place on the roster. Pragmatically realizing (especially with a family to support) that every little bit helps, he did his bit to try to be “one of the guys,” even if he couldn’t quite pull it off. Here’s part of his entry from May 26, a month after he’d been recalled from a brief banishment to the minors:

I’m trying to so hard to be one of the boys I’m even listening to country music. And enjoying it. The back of the bus is the country-music enclave, and most of the players are part of it. So far, though, we’ve not been able to swing over city boys like Tommy Davis, Tommy Harper and John Kennedy. I think we’ll get them in the end, though. Maybe with a bull fiddle.

Bouton was a city boy himself, however, having grown up in the New York area and Chicago. Maybe he would have been more comfortable in other parts of the bus:

The middle of the bus is dominated by Tommy Davis and his groovy tape machine, and the quiet guys sit in front, guys like Gus Gil and Freddy (Poor Devil) Velazquez. Mike Marshall also sits in front looking for somebody to play chess with him. I’ve played with him a few times…

That reference to a tape machine’s interesting. These days, if someone doesn’t like another player’s music, I imagine it’s not much of an issue. My guess is most music on player buses is heard through iPods, allowing each listener to vanish into his own world as much as they do on a typical mass transit journey. 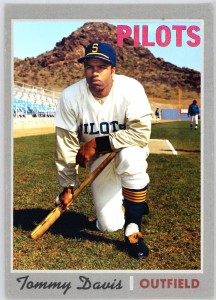 Like Jim Bouton, Tommy Davis would play most of 1969 with the Seattle Pilots, but end the season with the Houston Astros.

What kind of tape player would Davis (a former National League batting champion who’d gotten a key hit against Bouton in a 1-0 1963 World Series game the pitcher lost) have been using? Cassette machines were on the market by the late 1960s, but they were pretty clunky and not noted for high-quality musical use in their early days. There would have been a limited selection of commercially available cassette tapes, and making cassettes from vinyl releases was likewise far less widespread than it would be just a few years later. Maybe he was even lugging around a reel-to-reel player? One assumes, though, he played whatever he was hauling onboard loud, if the machine “dominated” by middle of the bus.

The country western music got a big workout in the clubhouse after the win. There are four or five different tape players around and they make quite a racket. One of the favorites is “Dirty Old Egg-Sucking Dog.” Gene Brabender knows all the words to that one. Another is, “Happy Birthday, Joe Beam.” It starts out, “They’re hanging Joe Beam today…” Seems that Joe Beam killed eleven guys before he was twelve and they said he was an “unruly boy.” And right at the end, when they hang him, they break out into “Happy Birthday, Joe Beam.” Breaks us up.

The players might  have heard “Dirty Old Egg-Sucking Dog” from Johnny Cash’s 1968 hit concert LP At Folsom Prison. He performed both songs at that legendary concert. Bouton got the title of one song wrong, though: it’s “Joe Bean” Johnny sings about, not Joe Beam. (I’ll have to check the most recent edition of Ball Four to see if anyone ever caught that.) As “Joe Bean” only made it onto the expanded CD reissue of At Folsom Prison, the Pilots must have known it from its appearance on Johnny’s 1966 LP Everybody Loves a Nut, which also included a previous version of “Dirty Old Egg-Sucking Dog,” as it happens.

It’s a little strange, incidentally, that Bouton doesn’t cite Cash as the singer. At Folsom Prison was a very popular album, and not just among country audiences, reaching #13 on the pop charts. As Jim wrote his August 13 entry, Cash’s follow-up At San Quentin was on its way to #1, where it would reside for four consecutive weeks starting August 23. Johnny had also started his popular network variety show in June 1969, and Bouton should have been able to catch at least a few of those Saturday night broadcasts, as not all Saturday major league games were played at night. 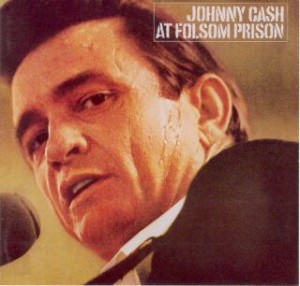 A couple weeks after that August 13 entry, Bouton was traded from the Seattle Pilots to the Houston Astros, where Jim quickly befriended young pitcher Larry Dierker, on his way to a 20-win season (his only one, as it turned out). Larry had rather more contemporary musical tastes than Bouton’s Seattle teammates. In the midst of shutting out the San Francisco Giants on September 5, Jim wrote, “Between innings of this great ballgame he pitched, Dierker sat on the bench and sang ‘Rocky Raccoon.’”

“Rocky Raccoon,” of course, came off the Beatles’ White Album, as popular a release as there was in the late 1960s, even though it had been out for almost a year by that time. Perhaps with Dierker’s encouragement—finding out Bouton was writing a book, he started feeding the older reliever possible quotes just days after Jim joined the Astros—the author asserts what were probably his true musical tastes more confidently on September 19:

Larry Dierker and I much prefer the Beatles to country-western music. As a protest against the amount of country-western we have to listen to, we have composed what we consider a typical song of the genre. It took us about two innings.

There follows the 22-line tune they wrote. I won’t reproduce the whole thing here (who knows, it might even be copyrighted), but it begins “I want my baby back again, she done left town with my best friend.” References to waiting by the phone, a broken heart, a murder, a faithless sweetheart, hitting the bottle, a prison cell, “Billy Joe,” and the concluding resolution “but with the Lord I’ll carry on” make it clear Bouton and Dierker had absorbed the principal clichés of the genre. 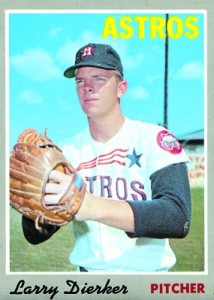 Dierker, incidentally, is portrayed as quite a fun-loving free spirit in the book, as is another Astros teammate, third baseman Doug Rader. Both, oddly, became managers in subsequent decades, Dierker even piloting the Astros, whom he guided to a four Central Division titles in five years between 1997-2001. Wonder if he was playing The White Album in the clubhouse after key victories then.

It’s not clear if any of their fellow Astros were also Beatles fans, but one wonders if Jim and Larry managed to hear Abbey Road before the season ended. The LP was released on September 26, only a week or so before Houston played its last game of the year. The Astros, only a couple games off the Western Division lead when Bouton joined them in late August, had fallen out of contention; Dierker had already won his twentieth game (saved by Bouton); and there wasn’t really much else to distract them as they got ready for the off-season. If so, they could have sung “Maxwell’s Silver Hammer” the next day, when Bouton got hammered in Cincinnati, giving up two runs, two hits, and two walks while retiring only one batter. 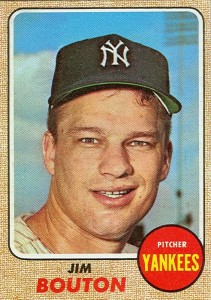 2 thoughts on “Ball Four and the Beatles”