It’s been a long time since I’ve seen a major league baseball game outside of San Francisco or Oakland. An absurdly long time, maybe, considering how much time I spend listening to games on the radio. It’s been maybe ten years since the last one I saw out of town, in Seattle. Until today, that is, when I went to Progressive Field to see the A’s beat the Indians 13-3 in downtown Cleveland. 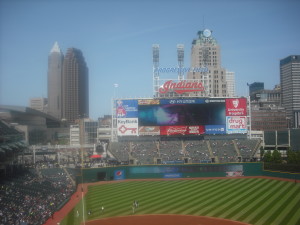 Progressive Field, with downtown Cleveland in the background, May 18, 2014.

When it opened twenty years ago, Progressive Field (named Jacobs Field until 2008) was one of the first wave of the new, modern downtown ballparks springing up in the wake of Baltimore’s Camden Yards. It might be a little less impressive now than it was then, now that somewhat more spectacular stadiums have opened in San Francisco and Pittsburgh, and quite a few other teams have relocated to spiffy downtown spaces. It’s still a good place to see a game, though, and has its advantages even over AT&T Park in San Francisco, if maybe not always the ones that fans and owners would like. 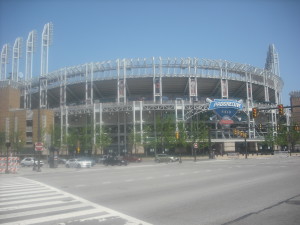 The view as you approach the entrance to Progressive Field.

One that no one would object to is the friendliness of the staff. Nothing’s free in San Francisco, so it was with some astonishment that I was handed a free program guide upon entering, the helpful fellow also giving us unhurried, precise directions to our seats. Not that AT&T’s staff aren’t friendly, but the friendliness is a lot less frenetic when there aren’t tens of thousands of fans swarming into the gates at once. Which is the advantage for a visitor like me that the average Clevelander probably wouldn’t like to see happening. One reason the pace is so relaxed is that fans aren’t turning out to Jacobs Field like they used to, let alone like they do in San Francisco, where there’s been years of consecutive sellouts. Here’s a shot of some outfield seats just minutes before game time: 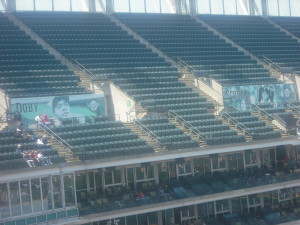 Left field seats at Progressive Field aren’t sold out these days, like they were in the old days.

Nice to see former Indian greats honored on the billboards, anyway. In this shot, we see images of Larry Doby, the first African-American player in the American League, and Herb Score, the pitcher who got off to a sensational start in his first couple seasons in the mid-1950s before his career was derailed when he was hit in the face by a line drive. (Score went on to broadcast Indian games on TV and radio for more than 30 years.)

It’s hard to believe now, but the Indians used to sell out games for years at a time. The stadium isn’t as novel now, and the team (despite a good year in 2013) isn’t as good, currently residing in the cellar ten games out of first. Looking on the bright side, that does mean you get a much more, dare I say, mellow experience from the stands, with plenty of room to stretch out, and fan banter so low-key that it’s easy to hold a conversation in normal voice (when they’re not blasting Queen between innings). My friend Laura was even able to yell her beer order to a vendor from almost a dozen seats over with no problem getting heard.

As it was in the sixties and sunny, it was a great mid-May Sunday to be at the ballpark. It wasn’t so great for the Indians, who fell behind pretty early and just kept losing ground. Pitching changes such as the one below were all-too-common sights, though that didn’t keep the strangely attired mascot from dancing on the dugout late in the contest: 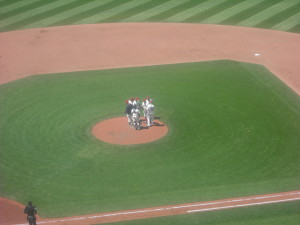 Another pitching change as the Indians fell farther and farther behind the A’s. 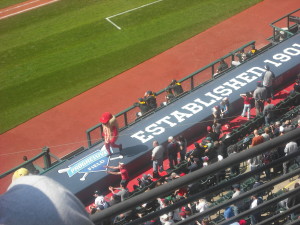 Strange peanut mascot dances on the dugout, much as Nero fiddled while Rome burned.

We were also able to walk over the bridge to the stadium from the neighborhood where I was staying. Which was worth it for this view of downtown, dominated by Terminal Tower: 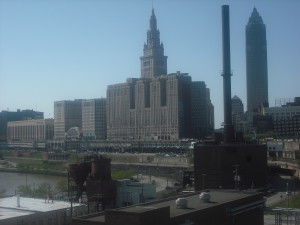 Terminal Tower (the leftmost of the two tall buildings here) dominates this view of downtown Cleveland.