Considering it’s just south of San Francisco, Pacifica doesn’t get nearly as many visitors as some other communities neighboring the big city, like Berkeley, Oakland, and much of Marin County. A few weeks ago I went to a birthday party at the southern tip of Pacifica, however, and on the way down, I took the opportunity to do a hike I’d heard about but never done. 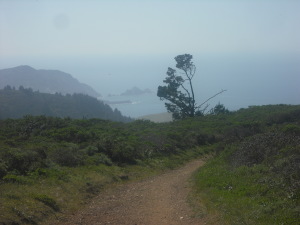 The first challenge in walking Sweeney Ridge Trail is getting there in the first place. Since it’s right off the road the runs by the ocean, Highway 1, you’d think that wouldn’t be such a big deal. You can’t turn right into the entrance if you’re heading south on 1 from San Francisco, though, and even after you make a U-turn and retrace your steps, the steep short road toward the trail is so sharp and short that you’ll easily miss it if you don’t know exactly where to turn. Look for the Shelldance Orchid Nursery sign when you’re going south – it’s actually much easier to see from the ocean side of the highway – and steel yourself for turning sharply and immediately when you see the sign after doing the U-turn, though that sign’s almost hidden from sight when you’re driving north. 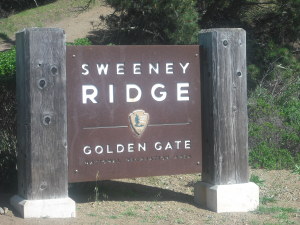 The Sweeney Ridge trailhead, in the back of the Shelldance Orchid Nursery parking lot.

After you drive up the steep, narrow, short hill and park behind the nursery, the next challenge is getting up the steep path. Hikers in reasonable shape should not have a problem, but many casual weekend walkers might cower at the sight of the path veering upward as soon as you set foot on the trail: 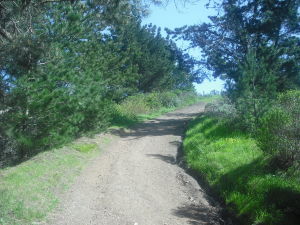 And it’s not as if you scamper up that bit and then level out, or take a leisurely wind up to the peaks. Seems like it keeps on going up and up, usually at a fairly-to-quite-steep grade, for a good half hour or so: 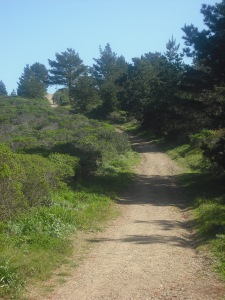 By keeping on the trail as it veers right and starts to near the 1,000-foot-elevation mark, you come across a most unexpected, and not entirely welcome, landmark: 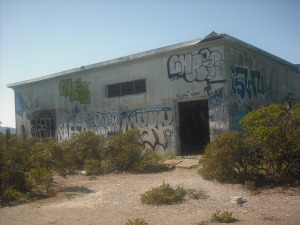 This is one of the abandoned buildings from the Nike Missile base, one of about a dozen scattered throughout the Bay Area (there was also one on Angel Island, near Marin County and Alcatraz). It’s quite jarring, this ugly reminder of the cold war right in the middle of a hike otherwise dominated by rolling hills on almost every side: 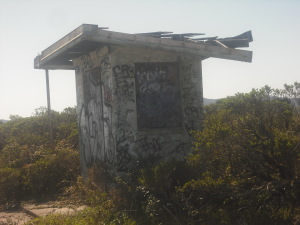 Nike buildings aside, are there views, of both the Pacific Ocean to the west, and the San Francisco Bay to the east? Sure, but they’re not the most unspoiled ones: 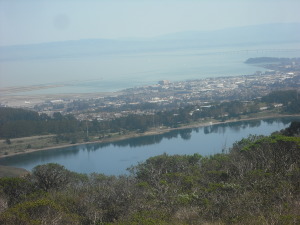 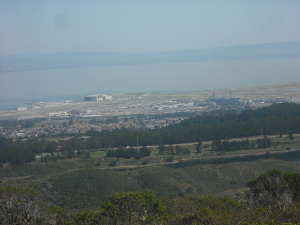 That’s the San Francisco airport, on this slightly different view of the bay from the trail.

You’re really not that far from civilization here, and even Highway 1 is often visible from the trails: 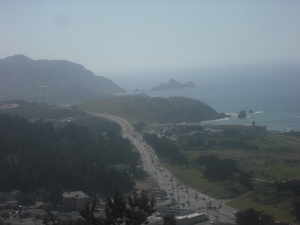 As another reminder of man’s intrusion onto this natural space, albeit almost two centuries before the missiles briefly planted themselves here, there’s this monument to the spot where European explorers first discovered the San Francisco Bay: 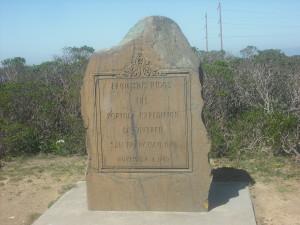 The inscription on this monument reads: “From this ridge the Portola Exhibition discovered San Francisco Bay November 4, 1969”

Yet there are spots where the highway, the housing, and even the airport are hidden, and you can revel in the ocean view: 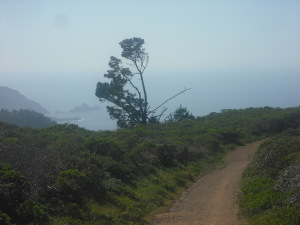 You can take walks of quite varying lengths from the trailhead, though going about five miles or so roundtrip (about a mile past the Nike missile site, and then back), as I did, makes for a pretty full to two to three hours. For more information, check http://www.everytrail.com/guide/sweeney-ridge-golden-gate-np-conservancy or http://www.parksconservancy.org/visit/park-sites/sweeney-ridge.html.