Time was when Reno, Nevada was known — like Las Vegas and the entire state of Nevada — for its casinos. A town where, as Richard & Mimi Fariña sang in their song “Reno, Nevada” (done better by Fairport Convention a few years later on the BBC and on French television), “The odds have been doubled, and it ain’t worth the trouble/And you’re never going nowhere at all.” And to look outside my hotel when I visited in late April, you’d think that nothing had changed. 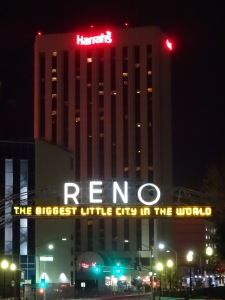 The street scene in front of my non-smoking, non-gaming hotel.

Yet these days Reno, Nevada is a lot more than a casino city. In fact, you could easily visit, as I recently did, and not come across casino culture at all, most of it being contained within about three or four square blocks. Reno’s also a fairly liberal place where biking, hiking, and outdoor activities in general thrive, as does a decent arts scene.

Reno’s not too big, and it’s just a ten- or fifteen-minute drive to the Huffaker Park and Mountain Trail. No, these are not going to challenge the vistas and greenery of the many fine parks in the San Francisco Bay Area, my home base. On the other hand, it’s nice to walk around for an hour or so on a weekday morning, as I did, and come across no more than a couple other people. The trail’s narrow and rocky, but gives you some good looks at Reno’s compact downtown and the surrounding area, though the solitude’s sometimes interrupted by the sound of airplanes landing at the nearby airport: 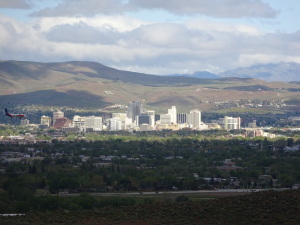 Note airplane coming in for a landing at the far left.

If you want to get some biking miles in (I do) and don’t care to do some rugged mountain trails (I don’t), the flat and mostly well-paved Truckee River Bike Trail runs twelve miles, and can easily be picked up bang in the middle of downtown:

The bike trail in downtown Reno. 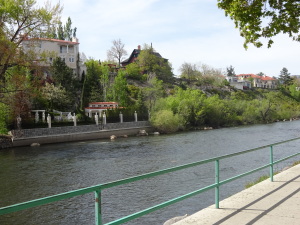 The best views are on the four miles or so that run west of downtown, passing through some of Reno’s well-to-do neighborhoods, including some small well-kept parks: 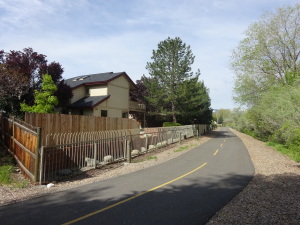 Near the western end of the bike trail. 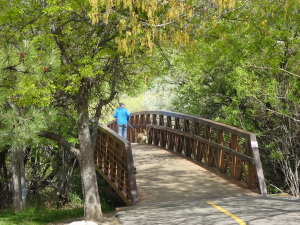 Bridge near the western end of the trail. 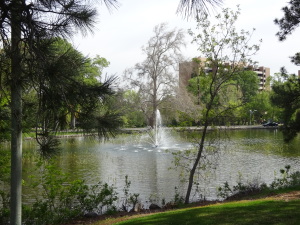 The eight miles east of town are a little rougher, both in physical character, as the paths are sometimes gravelly, and in physical appearance, often running right alongside industrial parks and trailer parks just to the north. There’s also a tent city of transients a mile or two to the east of downtown, near the Grand Resort and Casino skyscraper: 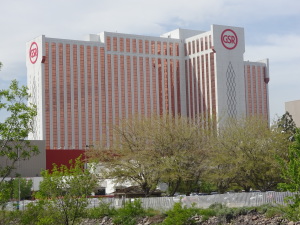 You wouldn’t guess that there are run-of-the-mill (to put it gently) industrial/trailer parks on the other side of this trail from some of the views of the south side: 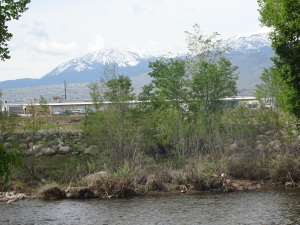 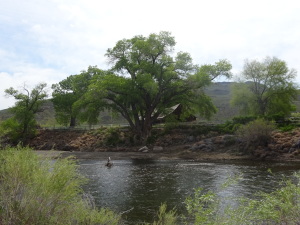 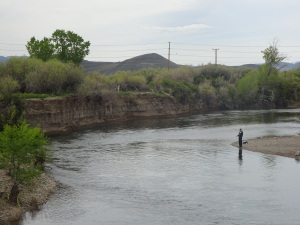 Though the trail does come to an inglorious halt at its eastern end, butting right up against a highway and railroad tracks: 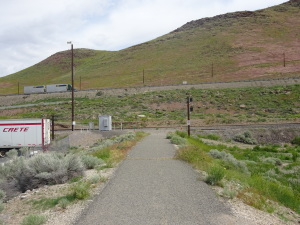 If you’re looking to watch sports as well as engage in them, Reno is home to the Arizona Diamondbacks’ AAA team. The stadium’s just a couple blocks walk from downtown, and $20 gets you a ticket eight rows back of the dugout. It looked like a good place to see a game, but I didn’t actually see a game here, though I had that ticket, as it got rained out: 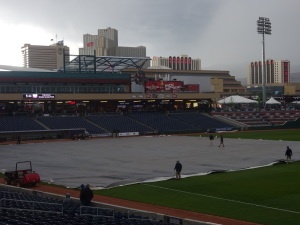 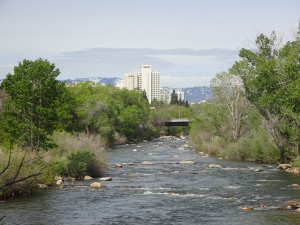 Reno, viewed from a bridge just east of downtown.