Since I started this blog, all of my posts about hiking and biking (except one for Reno) have been about places to do so in the San Francisco Bay Area. So why a post about where to do it in Kauai? It’s a five-hour flight away. True, but I was there in early September, I took a bunch of pictures, and San Francisco is about the closest US city to Kauai. And as pretty as San Francisco is, you’re not going to find pictures like these walking around the Bay Area: 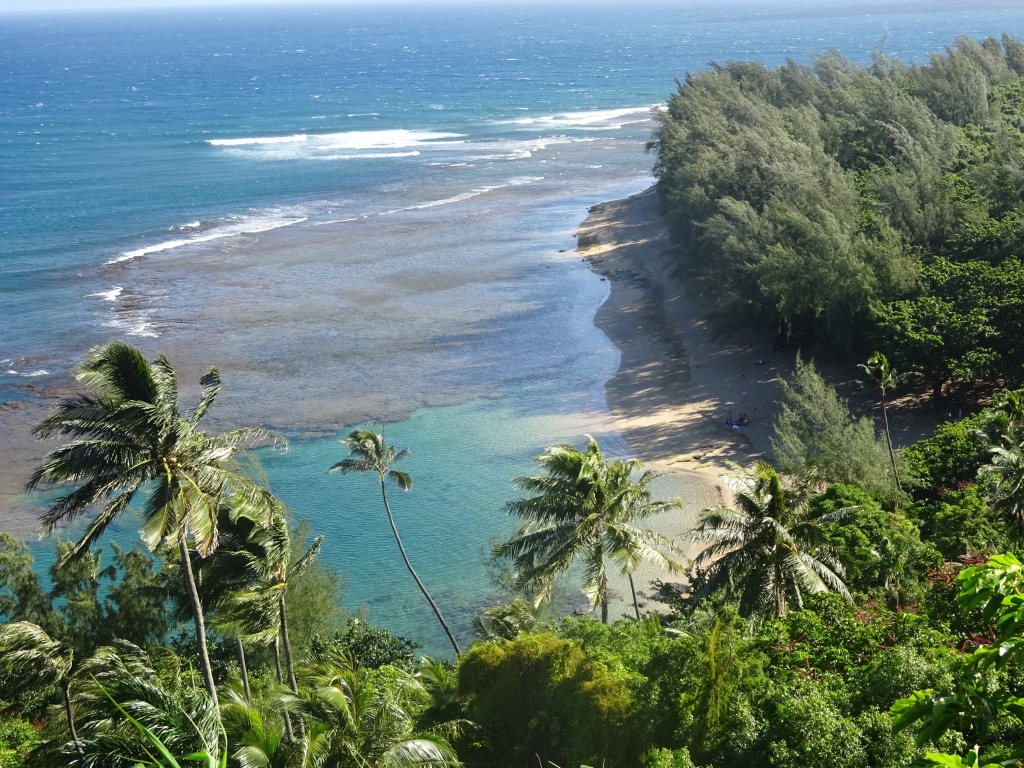 That’s from the Kalalau Trail on the island’s northern shore, overlooking Ke’e Beach. It’s a popular trail, though not overcrowded. Since the parking lot at its southern entrance also serves Ke’e Beach, it’s pretty hard to find a space there—and you probably will need to drive, since public transportation doesn’t go this far north. There’s a very rough dirt parking lot a quarter mile south, and a few dozen other places to leave your car on the side of the road within a half mile.

The Kalalau Trail runs eleven miles in all, and it’s not going to be possible to go all the way out and back, unless you camp at the northern end. It’s enough of a challenge to go five miles in and five miles back, as I did. Walking ten miles isn’t a problem for me, but this is a hilly trail—it has to be to get high enough for views like this: 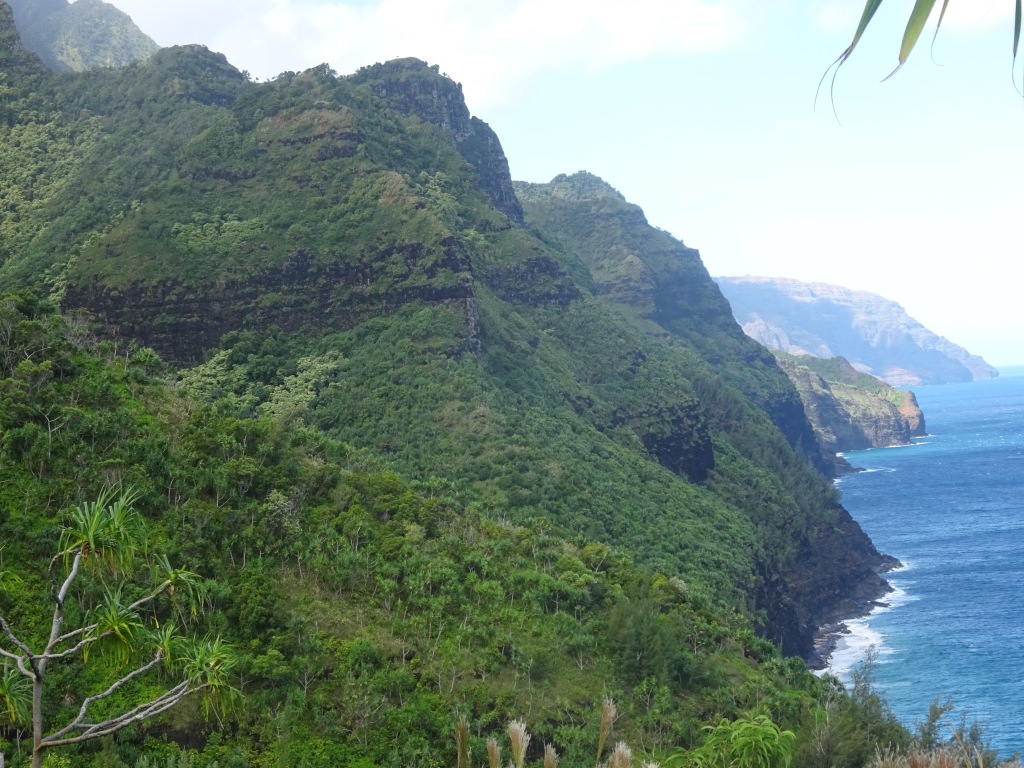 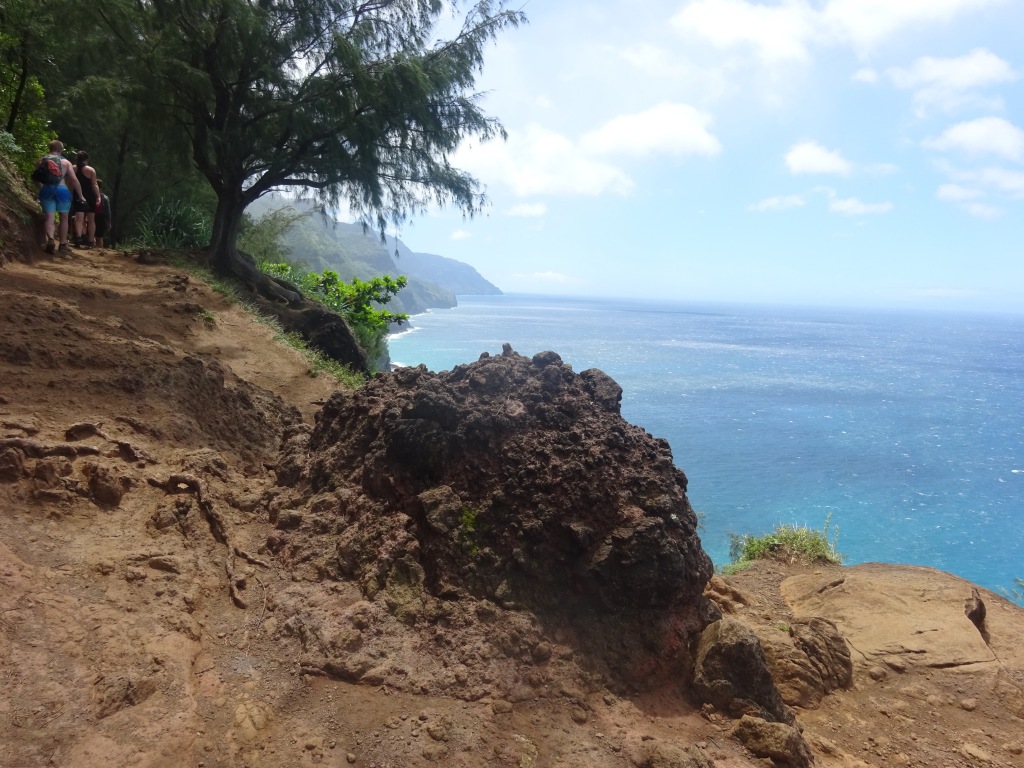 There are also a lot of rocks to clamber through at points; a stream to fjord (or just take off your shoes and wade through, as I did) after a couple miles or so; and a lot of mud. So much so that most hikers spend at least a couple minutes washing themselves off at the outdoor beach showerheads after coming out the Ke’e Beach end, as well as thoroughly dousing their shoes (and sometimes, other clothes). Unless you have high-end hiking boots, consider bringing a pair of worn-out shoes that won’t be good for many more hikes anyway, as I did. In fact, the shoes I wore won’t be good for any more hikes after this one. 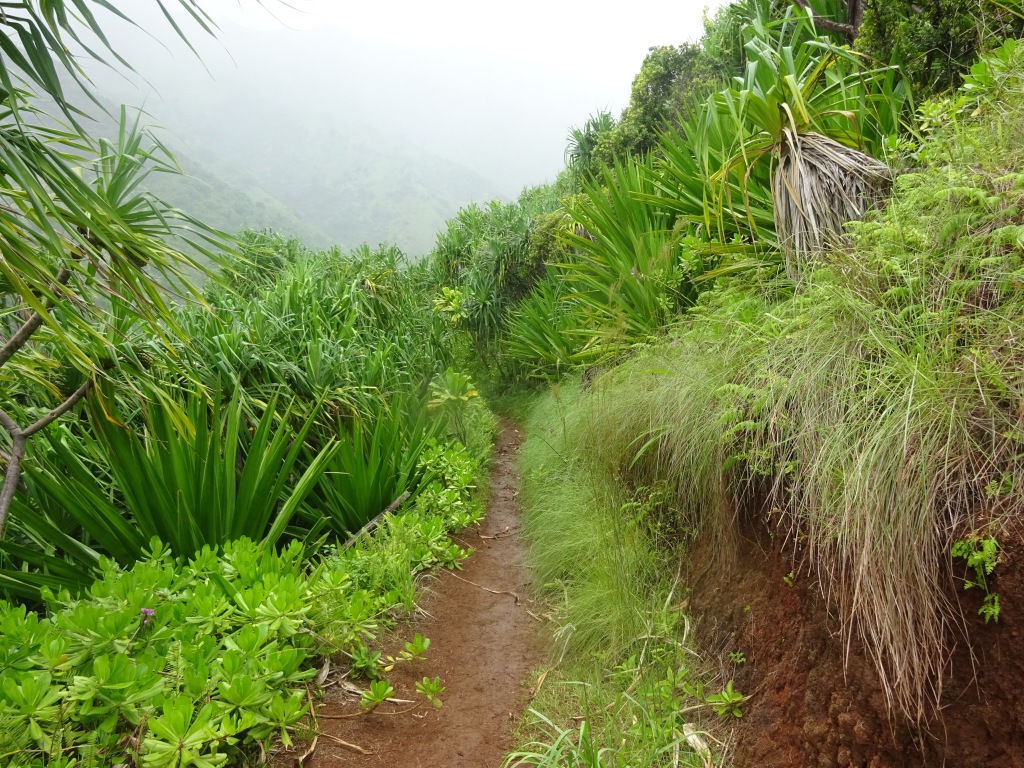 Much of the trail cuts a narrow path through jungle-like terrain.

There are other hikes on Kauai, but with only a week and so much swimming and snorkeling to do, I didn’t take any others. There are some in or near incredible canyons like this one that I’ll try if I go back: 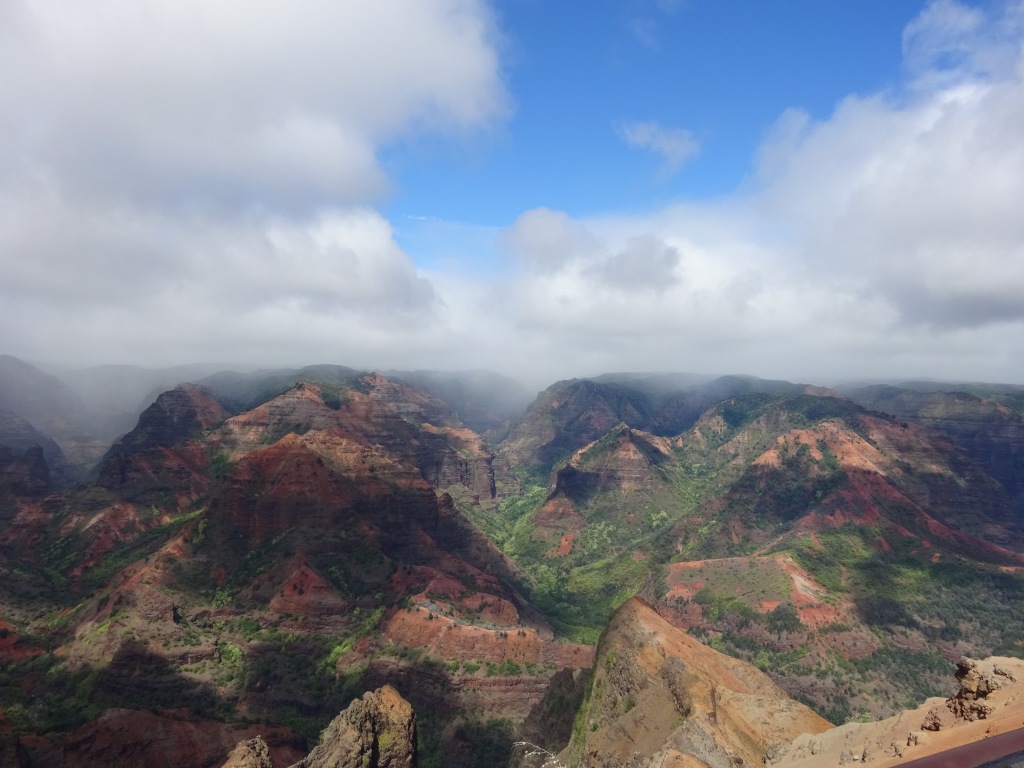 Biking, like hiking, takes a distant place behind snorkeling and swimming on Kauai. You have to use a road that rings much of the island to get most places, and there’s a good amount of traffic, especially when it goes through the town of Kapaa, where I stayed. I did see some triathlete-types bicyling the road (really a highway), but most recreational cyclists stick to the Kapaa Bike Path, which runs about seven miles. Most of them stick to the four miles or so that run close by the ocean north of town. 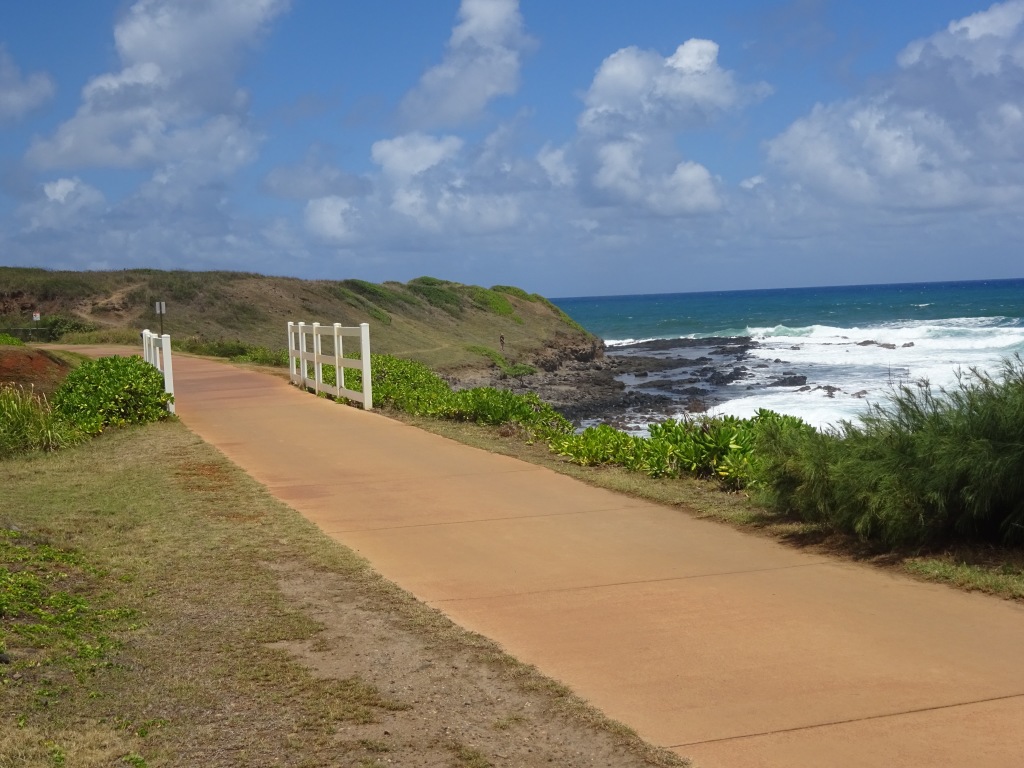 A stretch of the Kapaa bike path.

The good news: there are plenty of bike rental places in Kapaa, and while I didn’t do a price survey, the one I used, the Kapaa Beach Shop (which is just yards away from the path on the northern edge of town), charged a very reasonable $10 for the entire day. The not as good news, though hardly bad news, is that the bikes rented by all establishments seem to be clunky three-speeds. If you’re used to eighteen or so speeds as you whiz around paths connecting to the Golden Gate Bridge, as I am, it’s slow going. That’s not a big problem, though, as the path is pretty level with only very mild gradations, and you don’t really want to be going that fast with the ocean views on your right anyway. (Or going that fast considering there are a lot of tourists on bikes who might not be able to handle higher speeds too well.) 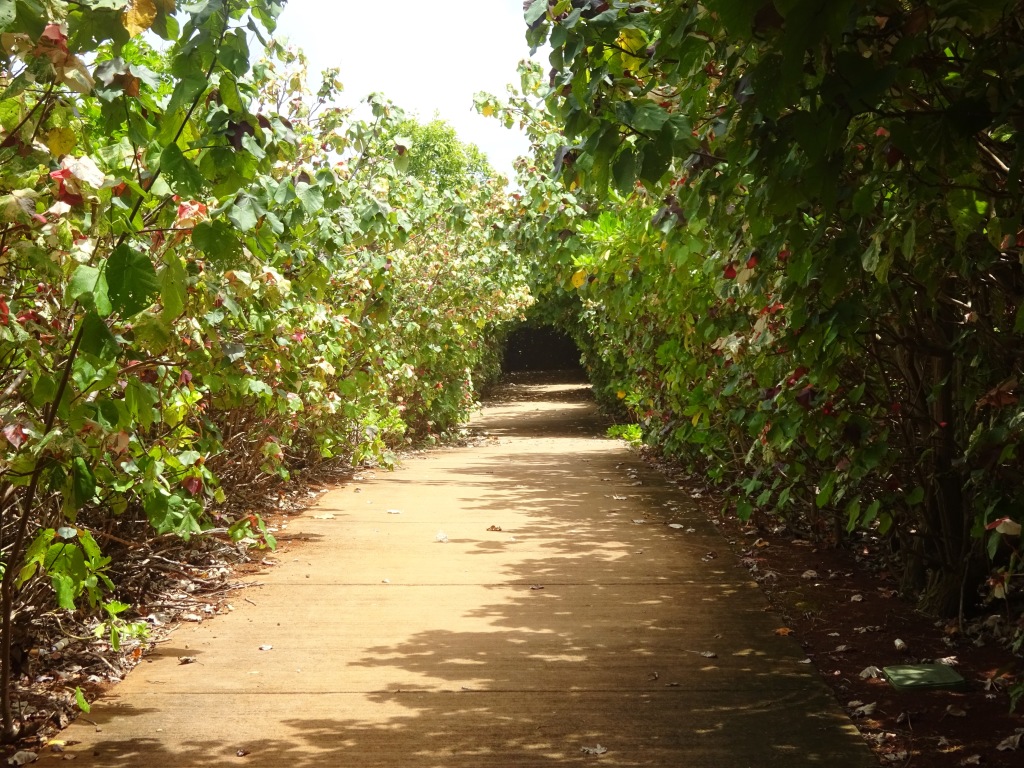 Short shaded inland detour off the main bike path, at its northern end.

Since it’s not that long, and not that much of a workout, I’ll consider actually walking the path (as many do, in part or whole) if I return. However you navigate it, there are periodic shaded shelters to lean your bike in, close to views like these: 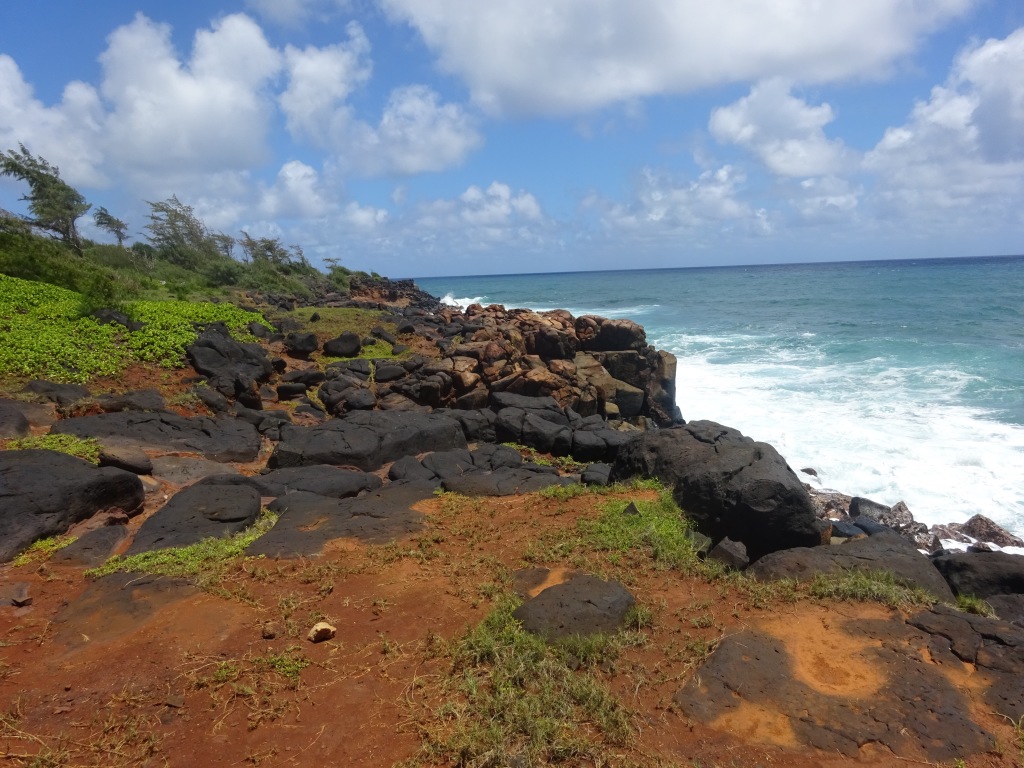 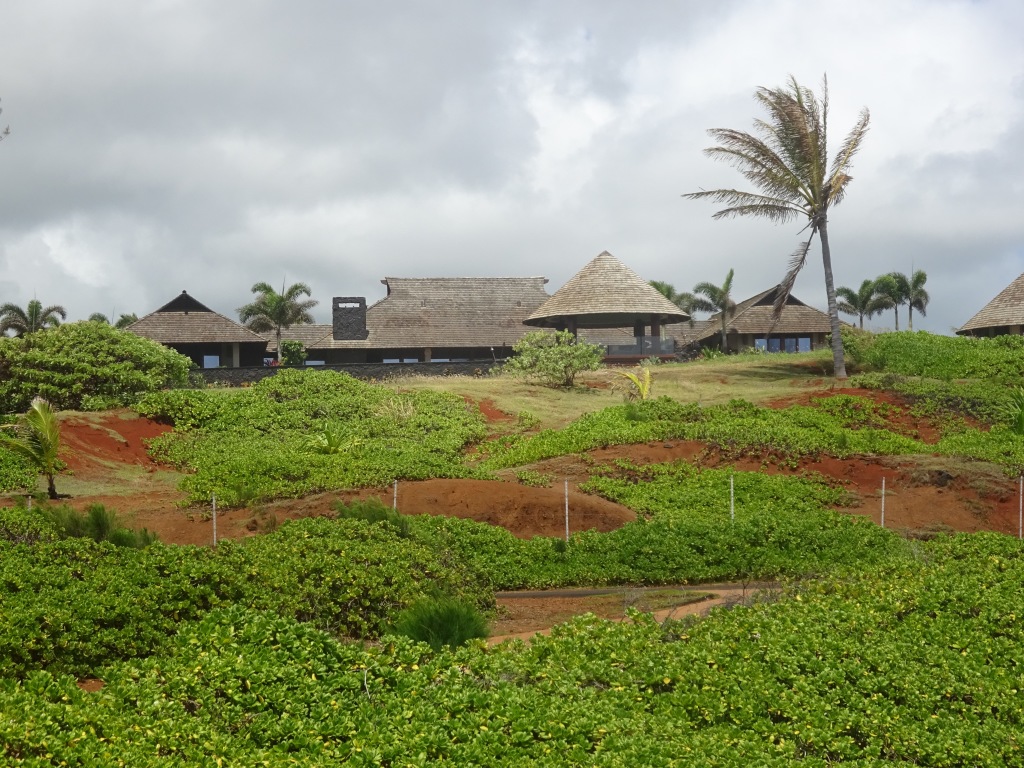 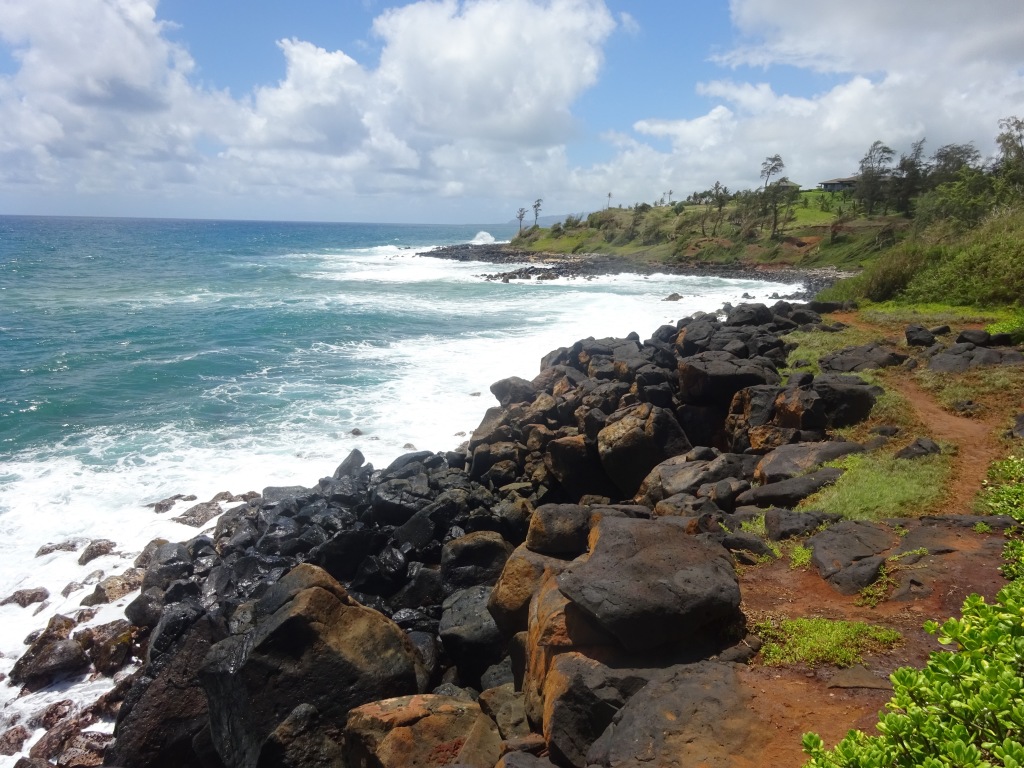 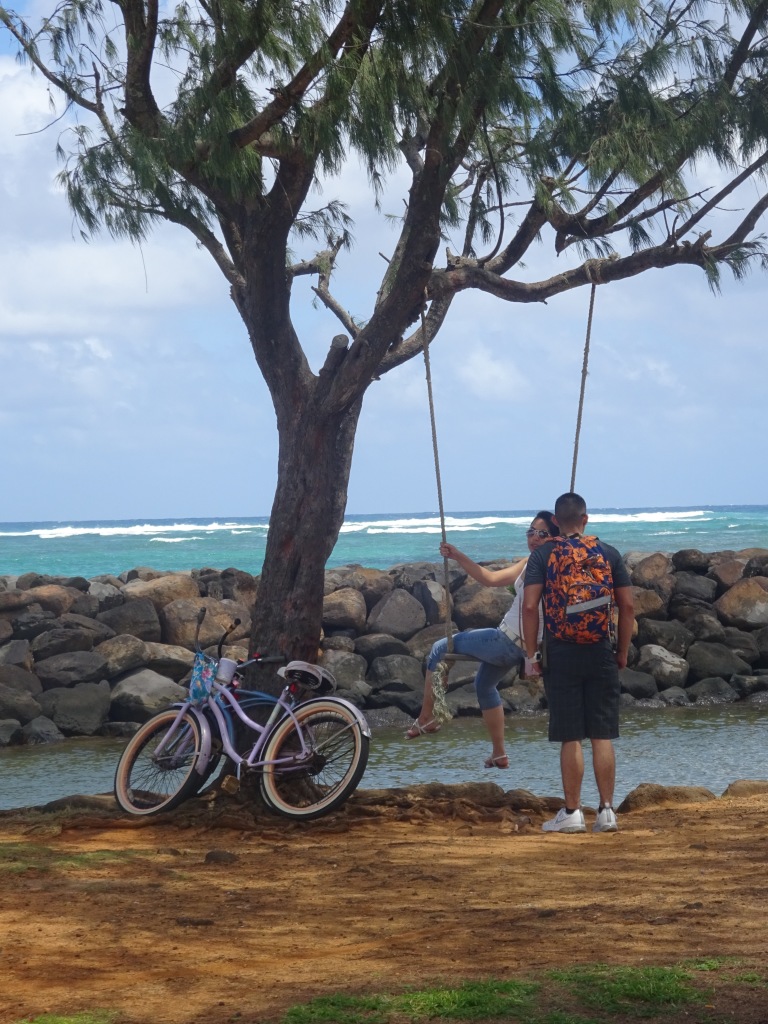 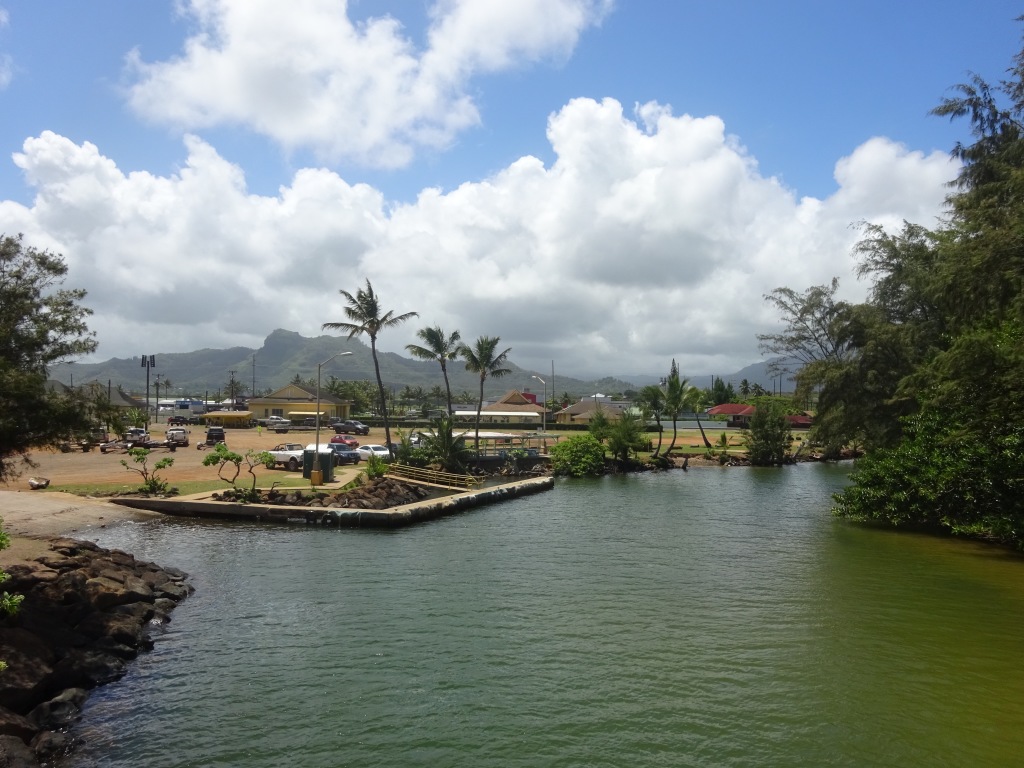 But as much as I hike and bike at home, I have to say you should prioritize swimming and snorkeling if you’re coming all this way. (The Kapaa Beach Shop also rents snorkeling gear at very reasonable rates, and the friendly, straightforward staff did not, like the first place I used, try to sell me things I didn’t ask for and in which I wasn’t interested.) Ke’e Beach, photographed below, and Tunnels Beach, which is only a mile or so south (though again presenting parking challenges), are the most highly recommended spots: 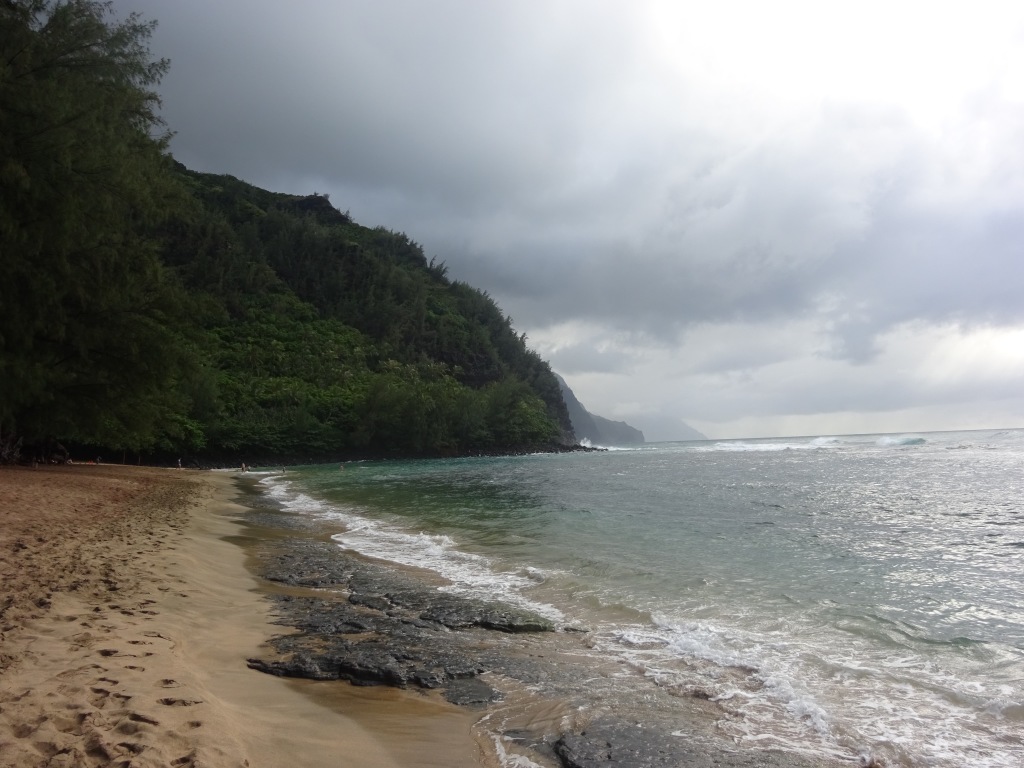 There’s other stuff to do and see in Kauai besides outdoor exercise, though I’d do that as breaks between the ocean. Here are a few: 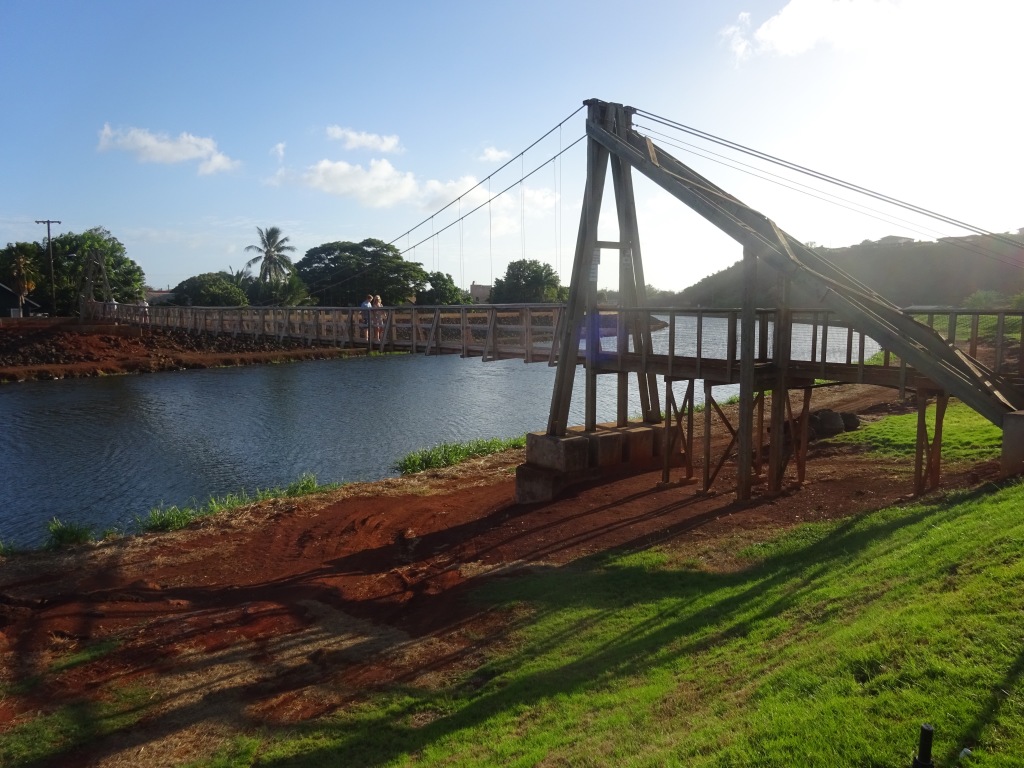 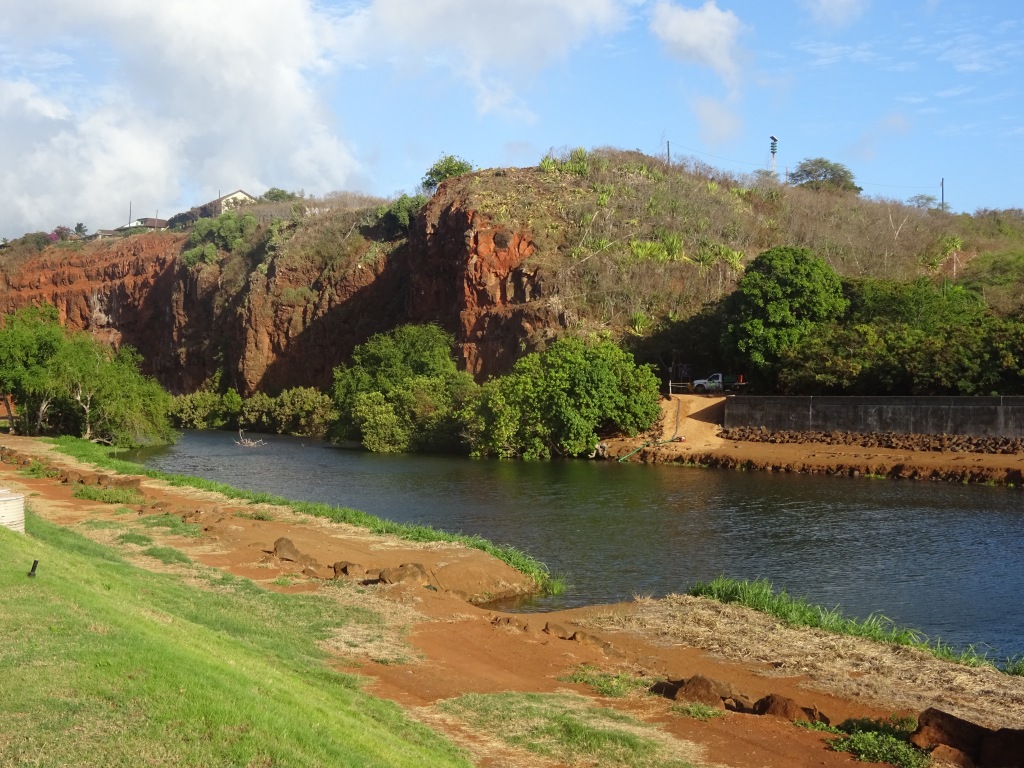 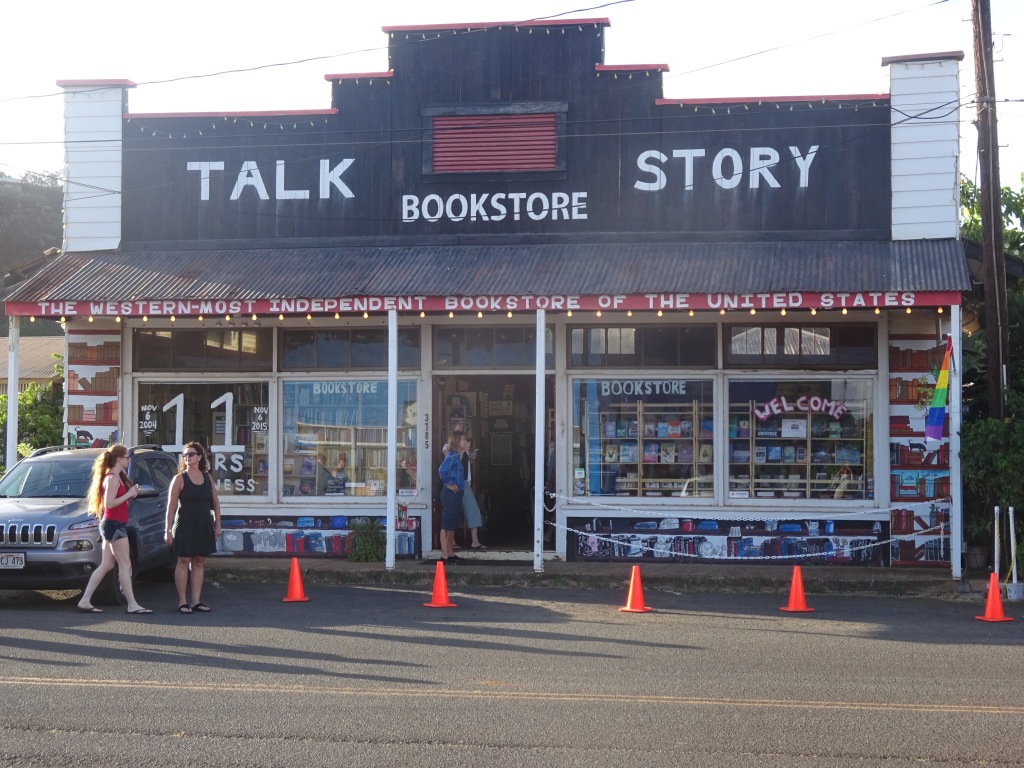 Talk Story in Hanapepe, “The Westernmost Independent Bookstore of the United States” (as it proclaims on the lettering at the bottom of the awning). 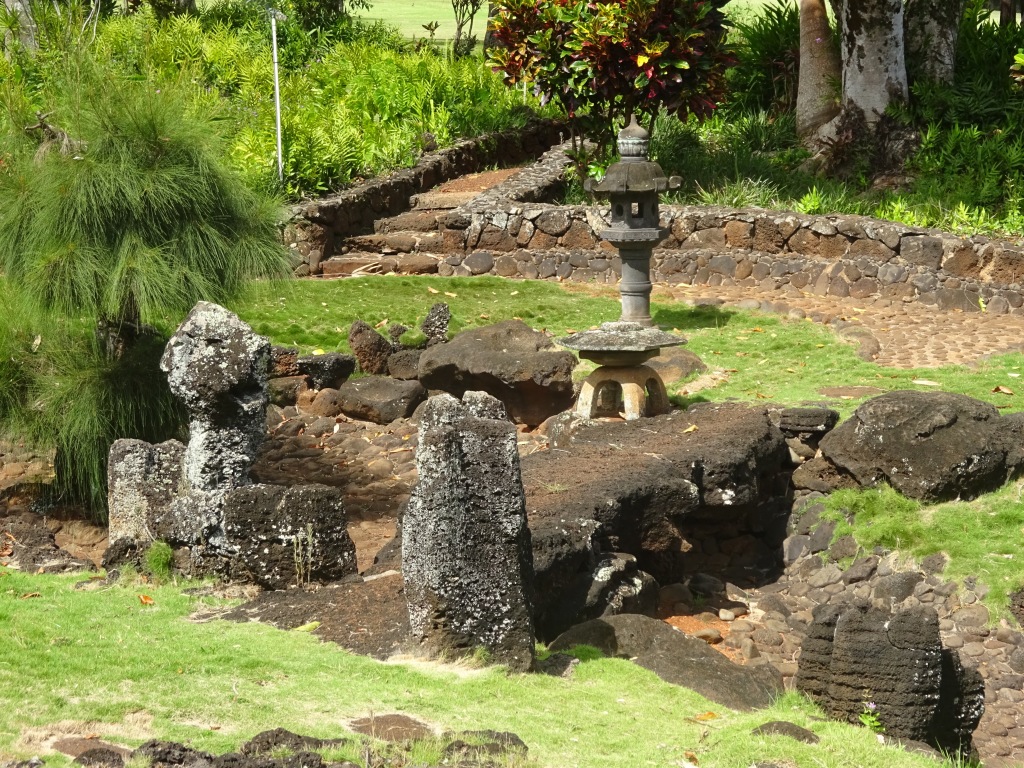 2 thoughts on “Biking and Hiking in Kauai”