It’s true – the Golden Gate Bridge gets a lot of tourists, and there seem to be more and more all the time. Sometimes there are so many that it’s physically difficult to walk (and certainly bike) parts of the pedestrian/bike path on the bridge’s eastern span, especially near the San Francisco side. But there are a few spectacular sights within just a few miles of the bridge that residents, let alone tourists, seldom visit, or don’t even know about. 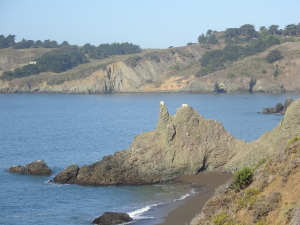 I covered one such area, the Pacific Overlook and the Batteries to Bluff Trail, in a post last year. It took me until this past summer, however, to make my first visit to another magnificent area near the bridge. True, this one is a good two or three miles away, not a few hundred yards away, and takes a lot more effort to visit. Still, I’ve biked by the trailhead down to Black Sands Beach at least a half dozen times without realizing what lay beneath. 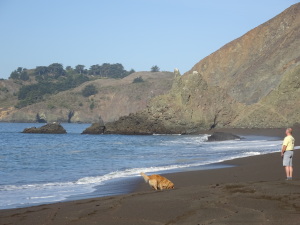 Dogs like Black Sands Beach even more than people do.

Black Sands Beach is only between a mile or two west of the bridge, but it’s not all that straightforward a journey to reach. The easiest, if least environmentally sound, way is driving up the steep, twisting Conzelman Road until you reach the peak of Hawk Hill. Then the street becomes one-way, and there’s a real steep, somewhat twisting downhill drop. It’s not recommended if you’re queasy about driving steep downhills with little separating you from the road and a drop to the bay, and certainly not recommended if your brakes are in need of a checkup.

You can do the same route by bicycle, as I do, though even if you’re in reasonable shape, it’s a lot of huffing and puffing to reach Hawk Hill. And again, if you’re at all nervous about heights in general, it’s a white-knuckle ride down the one-way section of the road. After a third of a mile or so the grade does start getting less severe, though you still might be going so fast you should keep an eye out for the small parking lot (holding a dozen cars or so) on the left. That’s where Upper Fisherman’s Trail leads down to the beach (there are racks for a couple bikes just as the trail leaves the parking lot, to the left). 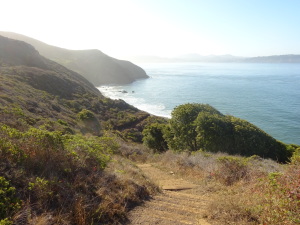 The trail down to Black Sands Beach.

Another option is to walk from the Marin side of Golden Gate Bridge – not as straightforward as it seems, as the hilly and winding hiking paths actually mostly take you away from the water and inland for three miles until a branch heads toward Upper Fisherman’s Trail. (More details about that hike in this post.) Once you reach the trail, however you get there, the journey’s not over – it’s a half-mile or so down to the beach, and the steps on some sections are steep enough that they might be hard to navigate if you have knee problems (or hard to climb up on the way back if you’re not in shape in general). 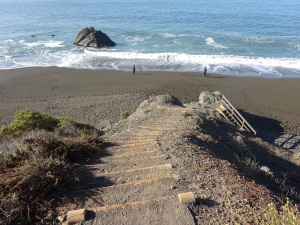 The bottom of the trail is one of the steepest parts.

But your rewards are views—isolated from the noise that follows you around almost everywhere in the Bay Area, and largely devoid of people, even on weekend mornings like the one I visited—that match up to the best of San Francisco Bay: 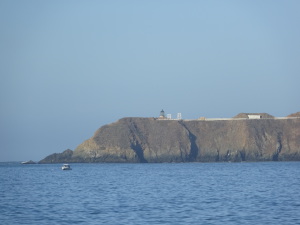 Point Bonita lighthouse, to the west of the beach. 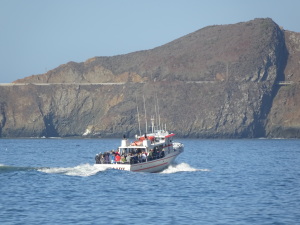 Pleasure boat goes by the beach. 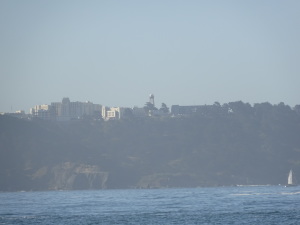 You can see the Land’s End trail of San Francisco from the beach, overlooked by the V.A. Hospital.

Admittedly there isn’t that much to do once you get down to the actual black sands. But taking in the views for twenty to thirty minutes is reward enough: 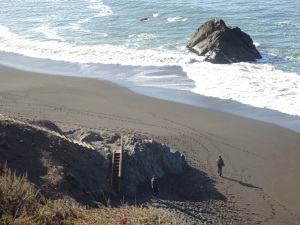 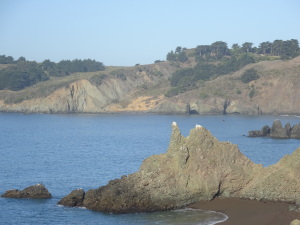 Then you face a pretty steep uphill walk back to the bike racks/parking lot, though you can pause for some more looks on the way: 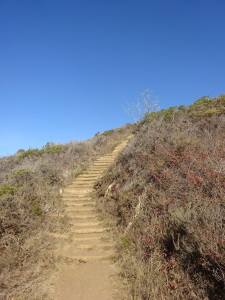 The trail back to the parking lot. 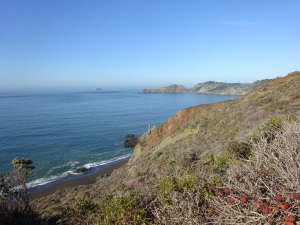 A look back from the trail.