Socially responsible investing – SRI for short – has grown enormously in the 21st century, but still has a way to go before it’s a mainstream financial strategy. Yet as one indication of how far it’s come, there are now movements within the movement. It seems kind of gauche to call something like this a “trend,” but certainly the fastest-growing sector of SRI seems to be fossil fuel divestment. That’s divesting from companies that produce fossil fuels, but also, just as crucially, investing in companies that support sustainable, green technology and energy use. 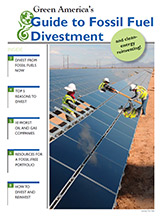 Such is the interest that Green America, the organization that does more than any other in the US to promote socially responsible consumerism, has recently produced a Guide to Fossil Fuel Divestment (and Clean-Energy Reinvesting). It’s downloadable as a free PDF from http://www.greenamerica.org/fossilfree. This page also lists a few of the mutual funds that are “fossil-free,” including Pax World Global Environmental Markets Fund — a division of the very first American SRI mutual fund, founded in 1971 in opposition to militarism and the Vietnam War.

The term Fossil Fuel Divestment, of course, is more than a little reminiscent of another idealistic movement that many thought had little chance of success when it launched decades ago. “The fossil fuel divestment movement is the apartheid of this generation,” proclaimed Natural Investments planner Michael Kramer in the January/February issue of Green America. “The more people who clamor for divestment, the more likely that elected officials will listen.”

In another similarity with the apartheid movement, some of the bolder colleges and universities are helping to lead the way by making fossil-free divestment commitments. Nine such institutions have done so, according to http://gofossilfree.org/commitments, and fellow San Franciscans will be proud to see San Francisco State University on the list. Numerous cities have made such commitments too (see same site for list), though it seems it’s catching on quickest on the West Coast, where Seattle, Portland (Oregon), Eugene, and Santa Monica are among the participants. The Bay Area’s heavily represented here too, with San Francisco, Berkeley, and Richmond (not far north of Berkeley) also doing their part.

Gofossilfree.org has plenty of other resources for those interesting in learning more, including information about starting local campaigns. Also check out this Go Fossil Free article in the March 16, 2014 San Jose Mercury News. 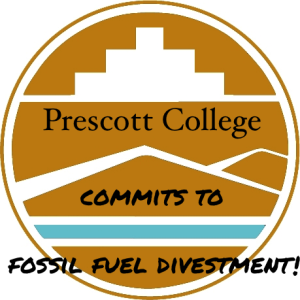 Prescott College, in Arizona, is one of the growing number of colleges and universities committing to fossil fuel divestment.