I’m not a great guy to see music biopics with, as it’s kind of like seeing a courtroom drama with a lawyer. I’m always finding all the things they’re getting wrong about a musician or band’s career, much like real lawyers can tell you why a certain defense would never fly. So when I heard the Coen Brothers were doing a movie based on Dave Van Ronk’s memoir (The Mayor of MacDougal Street, which is very good, though he didn’t finish it before his death), I was dubious. Would they really be either faithful to his story, or capture something of his spirit even if he was more a prototype for a fictional movie? 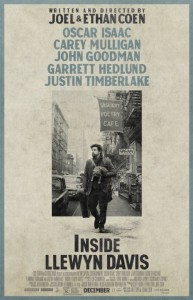 Well, I’m glad to report two surprises. One was that I liked the movie a lot, though it wasn’t perfect. The second is that, though the pre-release hype I came across (which went on for quite some time) did play up the Van Ronk connection, there really isn’t too much of Van Ronk in the movie’s story or main character. The Van Ronk book (co-written by Elijah Wald) continues to be cited as a source for the film in some media reports, which I find misleading. 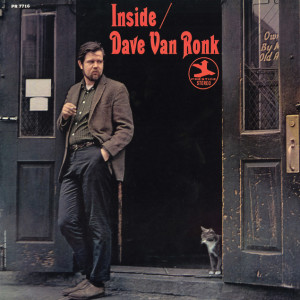 Not that I’m too annoyed; the film probably wouldn’t have been as good if it had tried to re-create the story of Van Ronk, or another early-‘60s Greenwich Village folkie. But as far as much resemblance between Van Ronk and the movie’s protagonist, let’s be serious here. Van Ronk had a gravelly, bluesy voice that marked him as one of the earthiest and best performers in the scene. Llewyn Davis (played by Oscar Isaac) sings rather unremarkable material that’s neither as bland as the most whitebread folk revival-ish stuff nor as cutting and keening as Van Ronk (or early Bob Dylan, who’s portrayed with a cameo near the very end). Some people like his tunes in the film; I found them neither here nor there, though they were close enough to the early-‘60s folk revival sound that they fit into the storyline okay. Van Ronk (along with his wife of the time, Terri Thal) was a respected part of the scene who did his part to help other musicians, including Dylan (who took his arrangement of “House of the Rising Sun” from Van Ronk’s). Davis is on the margins, on the verge of dropping out of the profession altogether, and alienating everybody, from girlfriends and managers to family and folkies.

Inside Llewyn Davis is more a solid story of a troubled young man than it is a reflection of Van Ronk’s musical and personal life. I didn’t observe the Greenwich Village scene firsthand (I wasn’t even born yet, actually), but the settings in the film do seem reasonably accurate from what a fan like me can glean from the available history. And the film does use some archetypes that have at least some basis in real-life early-‘60s folkies, managers, clubowners, promoters, and well-meaning if unhip liberal academic benefactors. Here are a few that might escape viewers with a casual-to-nonexistent knowledge of the folk revival (which, I emphasize, is no impediment to appreciating the movie):

The wholesome fellow from the military who sleeps on “Jim & Jean”’s floor near the beginning seems to me based on Tom Paxton. Paxton, despite his rabid anti-war views, did serve in the military before his career took off, and has steered entirely clear of controversy since he rose to prominence as a singer-songwriter in the mid-1960s, though the “Troy Nelson” figure in the movie seems more All-American and whitebread. 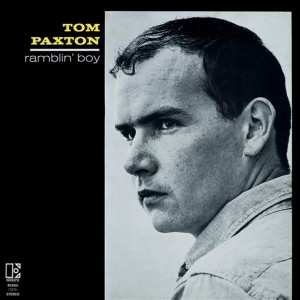 You don’t have to be a genius to know that “Bud Grossman,” the Chicago clubowner/manager who tells Davis he doesn’t hear enough money in Llewyn’s music, is based in part on Albert Grossman. Grossman also ran a club in Chicago, the Gate of Horn. It was one of the most popular folk clubs in the US, in fact, and was instrumental to the career of early (if largely forgotten) folk revival performer Bob Gibson, as well as a teenaged Jim (later Roger) McGuinn, who learned a lot of his folk chops there before going on to accompany folk stars and co-found the Byrds. Grossman soon became the most powerful folk manager with Dylan, Peter, Paul & Mary, Ian & Sylvia, and others on his client roster. (Later he’d become a big force in rock too, managing Janis Joplin, the Band, and others.)

Getting back to “Bud Grossman,” his suggestion in the movie that Davis sing as part of a trio Grossman’s forming also has some grounding in real-life events. It took some time for Peter, Paul & Mary to solidify their personnel. Van Ronk was considered for one of the two male slots, though it’s hard to imagine him fitting into the smooth harmonies in which they specialized. So was Bob Gibson.

Though Davis is a solo act in the film, it’s clear he’s recorded and performed earlier as part of a duo with another guy, now dead. There were a good if not overwhelming number of male folk duos, like Bud & Travis, Barry & Barry (one of whom was Barry McGuire of later “Eve of Destruction” fame), and (for a while) Bob Gibson and Bob Camp. Gibson and Camp recorded a live album at the Gate of Horn, and Grossman had considered teaming them with a woman singer before Peter, Paul & Mary were finalized. “Bob Camp” later became Hamilton Camp, most known for writing and recording the original version of “Pride of Man,” later made famous in a rock version by Quicksilver Messenger Service. 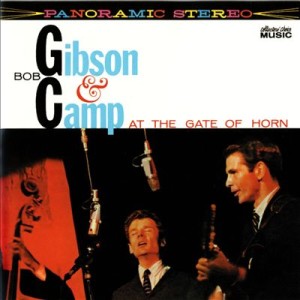 The smooth, urbane Columbia Records executive in the scene where Davis stumbles into a part as a session musician for the novelty “Please Mr. Kennedy” is obviously based on John Hammond. The legendary producer had played a big role in the careers of jazz giants like Billie Holiday, Charlie Christian, and Benny Goodman. He’d be the force behind signing Bob Dylan to a recording contract in late 1961, also producing Dylan’s earliest Columbia sessions. He became aware of Dylan through Bob’s participation (as harmonica player) in a session by another Columbia folk artist he was producing, Carolyn Hester. It’s not clear from the film whether Davis’s role in “Please Mr. Kennedy” will lead to a similar break, however. 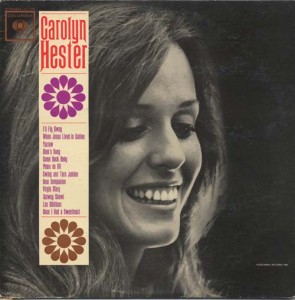 The ineffectual, elderly manager whom Davis accuses of failing to promote his career in an early scene rings true, as there were (and are) many such figures who don’t make their clients rich. One possible model is Harold Leventhal, who handled the career of Pete Seeger and the Weavers (and, later, Judy Collins and Arlo Guthrie). But he was respected, efficent, and successful, not the bumbler with the antiquated office portrayed in Inside Llewyn Davis. I’ve heard Folkways boss Moe Asch suggested as a model for this character too, but while Asch might have scraped at the financial margins of the record industry, I’d think he was much tougher and sharper.

The hapless, frumpy Appalachian-type folk singer Davis heckles at a club performance could be based in part on any number of musicians who started their career before the 1960s; played a particularly reverent, striving-to-be-authentic strain of folk music; and who are rarely noted today, in part because the over-reverence of their approach has made them more dated than early Dylan (or, for that matter, Van Ronk). Probably the highest-profile such musician, however, was Jean Ritchie, the dulcimer player from Kentucky who made her first records in the early 1950s, and is still alive at the age of 91. Ritchie’s music might strike some as prim, but it was livelier and more dignified than what little we hear of the woman in this scene. 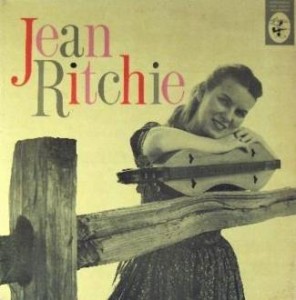 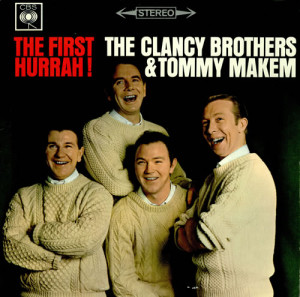 Finally, we come to two of the highest-ranking supporting roles in the film, those of “Jim” and “Jean.” There was indeed a duo named Jim & Jean on the ‘60s New York folk scene, and their first album is indeed of the kind of innocuous, traditional-based folk they played in the movie: 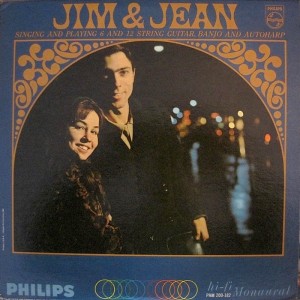 But Jim & Jean were more musically interesting than the movie, or that LP, might have you believe. Jim Glover was a close early friend of Phil Ochs, with whom he was part of a folk duo, the Sundowners, before hooking up with Jean Ray. In 1966, Jim & Jean did a good early folk-rock album, Changes, with off-the-beaten-track compositions (some yet to be recorded by their authors) by Ochs, Dylan, David Blue, and Eric Andersen. After a poppier, more elaborately produced third album, they ended their career, though Jean Ray helped inspire two famous songs by Neil Young, “Cinammon Girl” and “Cowgirl in the Sand.” Full disclosure: I did the liner notes for a CD reissue combining their second and third LPs (for which I interviewed Jean Ray, who died in 2007), which can be read here. 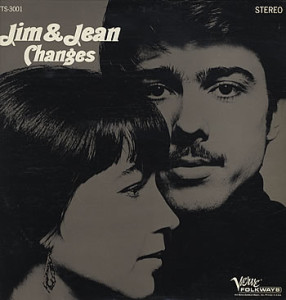 Does Inside Llewyn Davis accurately capture these characters, even in caricature? I wouldn’t say so, but that doesn’t bother me. It’s a story set in the early-‘60s Greenwich Village folk scene, not a biopic, though some of the movie’s publicity seemed to be prepping viewers for one. It’s got gallows humor and tragedy that doesn’t descend into pathos, and is recommended whether you’re a folk fan or not. And if you are a folk fan and want to hear the real deal, here’s some more shameless self-promotion. Check out the new two-CD compilation Greenwich Village in the ‘60s on Warner Brothers Australia, which collects several dozen vintage recordings from the folk revival, for which I also did the liner notes: 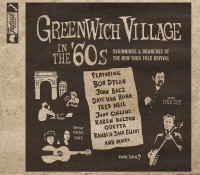