Just like it seems almost too easy—cheap, even—to post photos of the Golden Gate Bridge when you’re blogging about great San Francisco outdoors sites, so it is to post photos taken from the trail at Land’s End. Like this one: 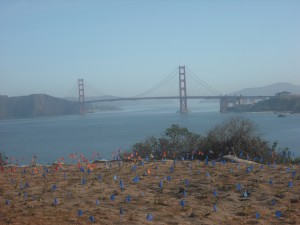 The Golden Gate Bridge, seen from the eastern end of Land’s End trail.

There you get Land’s End and the bridge in one shot. A key difference between this and most bridge pics is that most tourists don’t even know about Land’s End. In fact, some San Francisco residents haven’t even been to Land’s End. That’s unbelievable considering both its spectacular cliffside trail—running by the water between the bridge and Golden Gate Park—and its lack of much pedestrian traffic, even on near-ideal sunny Sunday mornings like this one. I guess I’m blowing the secret by blogging about it, but I’ll take my chances.

I much prefer entering Land’s End at its eastern end, which is much quieter than the large parking lot (including a Golden Gate National Recreation Area visitor center) at the western entrance near the famed Cliff House restaurant.  The trail as a whole, but especially this part—with its inconspicuous entrance, between a tony residential area and a golf course—has undergone some recent renovations. Here’s the best one, finally adding a few bike racks where previously there were none, forcing you to use a Stop sign pole down the street: 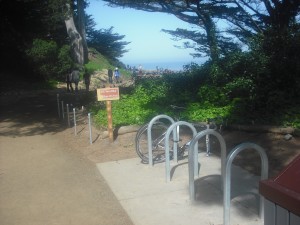 Be sure to take the scenic Lake Street bike path if you’re coming from points east, rather than the more traffic-heavy alternate routes: 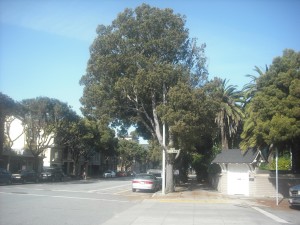 The Lake Street bike path, halfway between Land’s End and its start (at Arguello & Lake in the Inner Richmond)

I have mixed feelings, though, about the renovations just a few yards past the bike racks at the trail’s entrance: 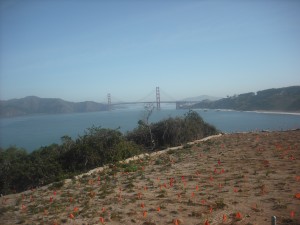 There used to be an elevated platform there. Yes, it obstructed part of the view, at least from some angles. But it was also where I saw a good friend get married a dozen years ago—possibly the best such outdoors location in San Francisco for such an occasion. It was one of those typically Mark Twain-nightmare socked-in foggy mid-summer days here, and as I drove out to the site, I had little hope it would lift. Magically, it did, only minutes before the ceremony, brilliant blue sunny skies bordering gray clouds just over the highest tips of the Golden Gate Bridge. Hollywood couldn’t have planned a better shot. And no, I don’t have a photo, unfortunately. In a happier footnote, the couple’s still married, with a son just a few years away from entering his teens.

Other modifications on the trail are more moderate, the most visible being a few graded steps in a couple sections and some unobtrusive small chained-together poles guarding some cliffside sections. You still get great views like these: 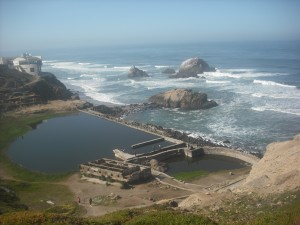 The Sutro Baths — the most spectacular view from Land’s End trail, near the western entrance. 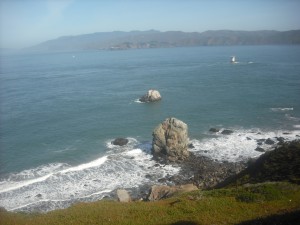 That’s the Marin Headlands from another point on the trail. 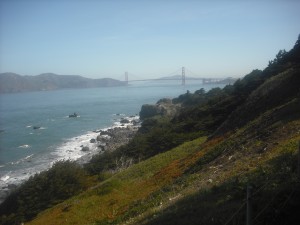 Yet another bridge view, though not from the ex-platform space near the eastern entrance. 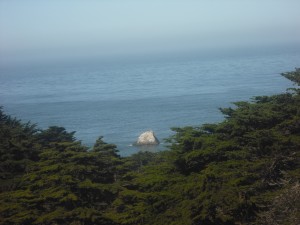 From the top of the steep stairs about halfway along the trail.

And you can still get great views from where that platform used to be (it seems like they’re putting in plants in the leveled space it formerly occupied). It’s sad, though, knowing I’ll never see a wedding there again. 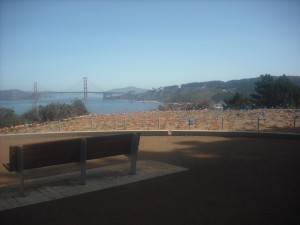 You can’t see weddings-on-a-platform anymore at the eastern end of Land’s End, but at least you can sit down while you enjoy the view.